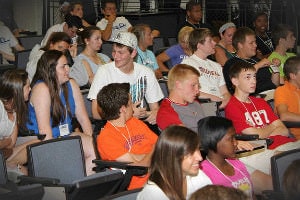 According to the director of Abolition Ohio and interim executive director of the human rights center at the University of Dayton, Tony Talbot, this was the first time training of this kind took place for one full year.

Through the program, educators are instructed on how to present sensitive information to students, and how to identify and deal with trauma triggers.

“We still have room to keep growing and growing,” Talbot said. “It’s intensive because you can’t just turn over the materials and give a classroom presentation because a kid might come forward and … if the school’s not prepared on how to respond, you’re going to cause more harm than good.”

Ohio Attorney General Mike DeWine listed trafficking education as focus area in his 2016 annual report. According to the report, 151 potential victims of human trafficking were identified and more than a third were 20 years old or younger.

Supporting the initiative, the School Trafficking Outreach Program received a nearly $15,000 grant from the Ohio Children’s Trust Fund, another several thousand dollars from the University of Dayton, and $1,500 from the Free to Run Foundation, Talbot said.