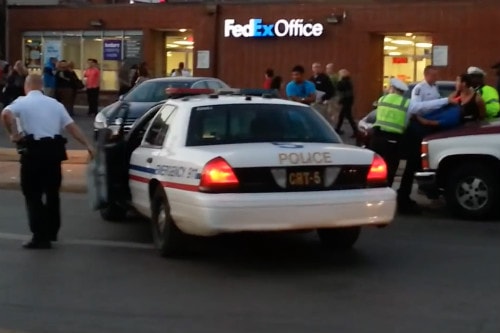 You can’t ignore the headlines. Violent crime has a tendency to go up right along with the temperatures. But does hot weather actually cause increases in crime?

Almost all the established academic literature that examines not just months, but the temperatures within those months has determined that there is a high correlation between increased temperature and elevated crime levels. Now, a team of researchers has developed a model that could help explain why. The researchers call the new model CLASH (Climate Aggression, and Self-control in Humans).

“Climate shapes how people live, it affects the culture in ways that we don’t think about in our daily lives,” said Brad Bushman, co-author of the study and professor of communication and psychology at The Ohio State University.

One theory, the “aggression” theory holds that people are more easily agitated in the heat because adrenaline and testosterone levels rise in the warmer temperatures.

Some researchers believe that hot climates and less variation in seasonal temperatures lead to a faster “life strategy”, less focus on the future, and less self-control – all of which contribute to more aggression and violence.

If higher temperatures were causing greater crime rates, then we should see crime incidences peak when temperatures are at their highest.

A crime analysis study by Ellen Cohn and James Rotton of Florida State University showed that there is a correlation between crime and heat, but as temperatures rose above 75 – 80℉, crime dropped.

This was proven again in a publication by boston.com of Columbus, Ohio weather in 2007, which found crime rates rose with high temperatures for a given date but fell off once the thermometer registered 85F or above.

This would seem to reinforce a second “community” theory which says that more crime is committed when more people gather in public. The nicer the weather, the more people are outside. Extremely high temperatures could drive people back into the air conditioning.

During the summer months, people spend more time outside, they stay outside, they drink, they have fun and socialize which in turn creates more of an opportunity for interactions of all sorts, including criminal behavior.

One interesting study of Major League Baseball batsmen who had been hit by pitches also offers support for the anger theory. It turns out that more batters are “beaned” by the pitcher when the temperature goes above 90F (above the Cohn/Rotton breaking point).

So we have a lot of suggestive evidence, but much of it somewhat contradictory. We don’t have enough consistent information to be certain that either the aggression hypothesis or the community theory is correct.

Both theories agree, though, that crime waves do generally track heat waves. That could be quite troublesome for the simple reason that if climate change is causing higher average temperatures for most of us, then we should expect the crime rate to rise in coming decades also.